"Ivan Vazov" National Theatre is the earliest and the most authoritative of Bulgarian stages, having a rich history, firmly anchored in its traditions, with a commanding and protean presence in the modernity of the present. The theatre offers a broad repertoire of both contemporary and classical plays appealing to the widest possible range of audiences.

Special attention is devoted to the development of national playwriting and at the same time the three stages of the National Theatre are open to all innovative and noteworthy creative endeavours.

In 1904, Minister of Education Prof. Ivan Shishmanov, a prominent figure, who studied in Austria, Germany and Switzerland, transformed at the request of and urged by the most influential representatives of Bulgarian culture the privately owned A Tear and Laughter theatre company into a state-run institution named National Theatre. The construction of the new national theatre began right in the heart of Sofia, on the site of the obsolete Osnova (Foundation) wooden playhouse.

The National Theatre has an impressive more than a century-long history. Becoming the centre of Bulgaria’s cultural life, the place keeps in its memory the triumphs of the greatest Bulgarian directors and actors on its stage; the work of the national poets and writes who have contributed to the theatre over the years.

Such remarkable actors and actresses as Vasil Kirkov, Adriana Budevska, Krustio Sarafov, Atanas Kirchev, Vera Ignatieva, Zlatina Nedeva, Ivan Popov, Geno Kirov, Elena Snezhina, Theodorina Stoicheva were among the founders of the creative company of the National Theatre. They formed the so-called First Generation of stars of Bulgaria’s leading company showcasing a variety of brilliant talent both in the classical repertoire and in the productions of Bulgarian plays, establishing a school that started the best Bulgarian acting traditions. Poet Pencho Slaveikov in his capacity of the theatre’s director and later, such renowned figures as poets Peyo Yavorov, Nikolay Liliev, Geo Milev and director Nikolay Massalitinov have made an outstanding contribution to the shaping of the creative nature of the theatre. It was these intellectuals of considerable accomplishments who moulded the National Theatre from a magnificent and remarkable building in the heart of Sofia into ‘a big school for all, accessible to all strata of society, ages and minds’ as Ivan Vazov put it.

It is no wonder that the National Theatre bears the name of Bulgaria’s great national writer and poet Ivan Vazov (1850–1921), whose historical dramas and tragedies and brilliant comedies contributed to build and develop a broad and inclusive repertoire of Bulgaria’s leading company. Apart from devotedly contributing as a playwright, Ivan Vazov was also one of the keenest theatregoers. Until the very end of his life he had a permanently reserved seat in the second row of the front stalls, preserved until this day and marked with a commemorative tablet ‘Ivan Vazov’s seat’.

The building of the National Theatre was finished in 1906 and the opening ceremony was held on 3 January 1907. It was designed by the architects Ferdinand Fellner and Hermann Helmer, who were hugely popular in the early twentieth century, to become one of Sofia’s most imposing and representative buildings in the Art Nouveau style, which was all the rage in those days. The plafond and the walls of the auditorium seating 848 were painted by artist Rudolf Fuchs from Vienna.

In early 1923, fire broke out in the theatre during a performance, engulfing the stage, part of the auditorium and the cloakroom. The company of the National Theatre moved to play at Svoboden Teatur and went on many tours of the country.

In 1929, the building reopened following a reconstructed by German architect Martin Dülfer. It was fully modernised, the stage was equipped with state-of-the-art technical systems that only two or three theatres across Europe boasted at thе time. The auditorium seated 1,236.

In the air raid of Sofia of 10 January 1944, part of the auditorium was destroyed along with some of the adjacent rooms and the entire south wing down to the stage itself. The company was evacuated to the small mountain town of Pirdop to return to Sofia later that year, giving performances at Balkan playhouse until the reconstruction of the National Theatre in 1949.

In 1972–1976, the building underwent a full-scale reconstruction led by Bulgarian architect Ivan Tomov and artists Zlatka Kozhuharova, retaining its original form as designed and constructed by Fellner and Helmer in 1907. The chamber hall seating 120 and an underground scene dock were completed. The auditorium, lobbies, foyers and the pediment over the central entrance were rendered quake-resistant using in-situ reinforced concrete structures designed to withstand an earthquake of 9.0 on the Richter scale.

The reconstructed building had state-of-the-art technical facilities and stage equipment. The auditorium seated 780. The unique tapestry of the front-of-house curtain was designed by artists Ivan Kirkov and Angel Peichev; the plafond and the walls of the house were repainted by such renowned Bulgarian painters as Dechko Ouzounov and Ivan Kirkov.

Presently, the National Theatre is the most significant and representative Bulgarian theatrical institution with its three stages, a permanent theatre company and a rich repertoire staging ten or so premieres per season.

Currently, the National Theatre has a main auditorium accommodating 780 people and advanced stage equipment; a chamber hall seating 120 and a stage on the fourth floor with a seating capacity of 90.

Choose a document from our archive to download it in PDF. 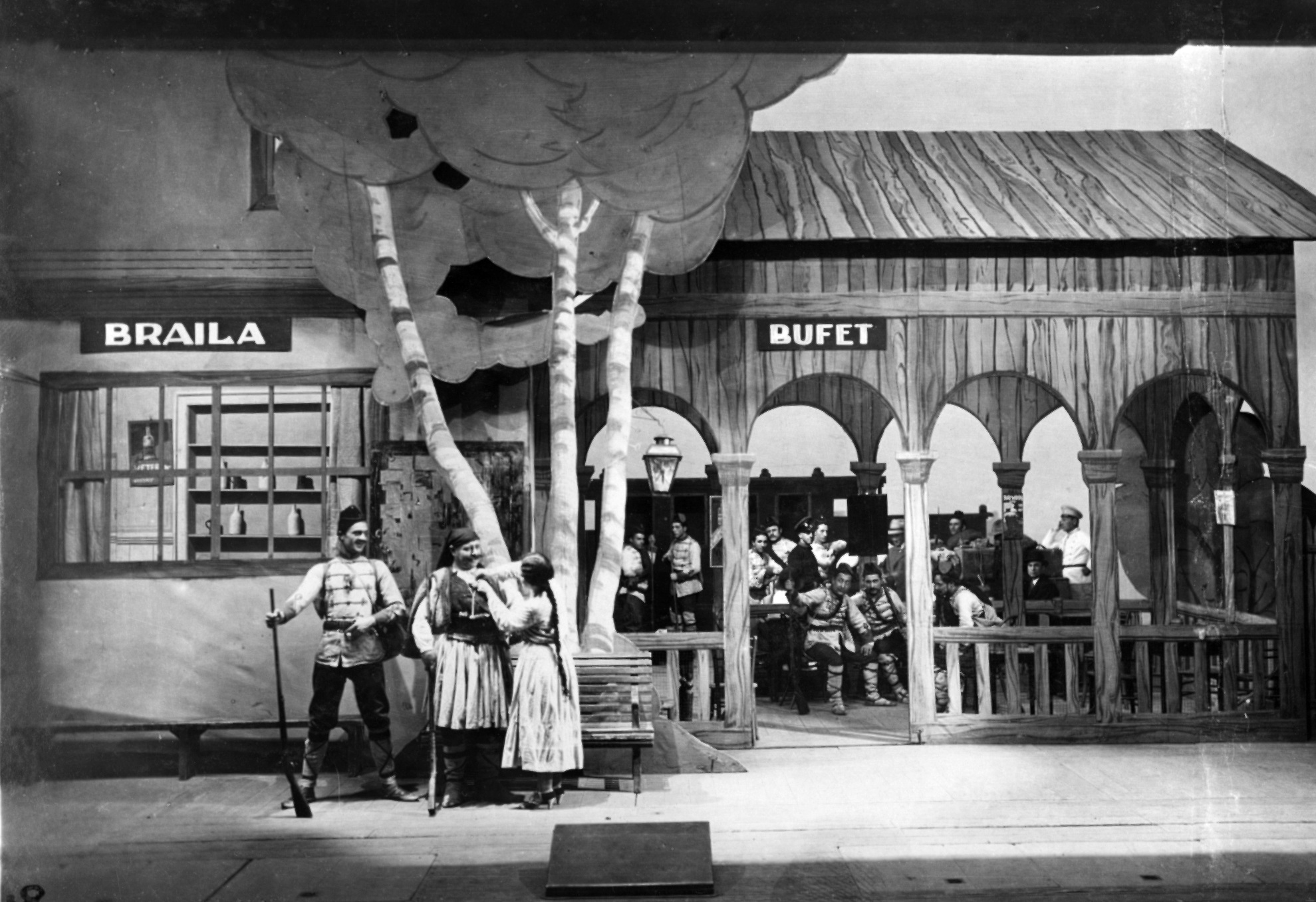 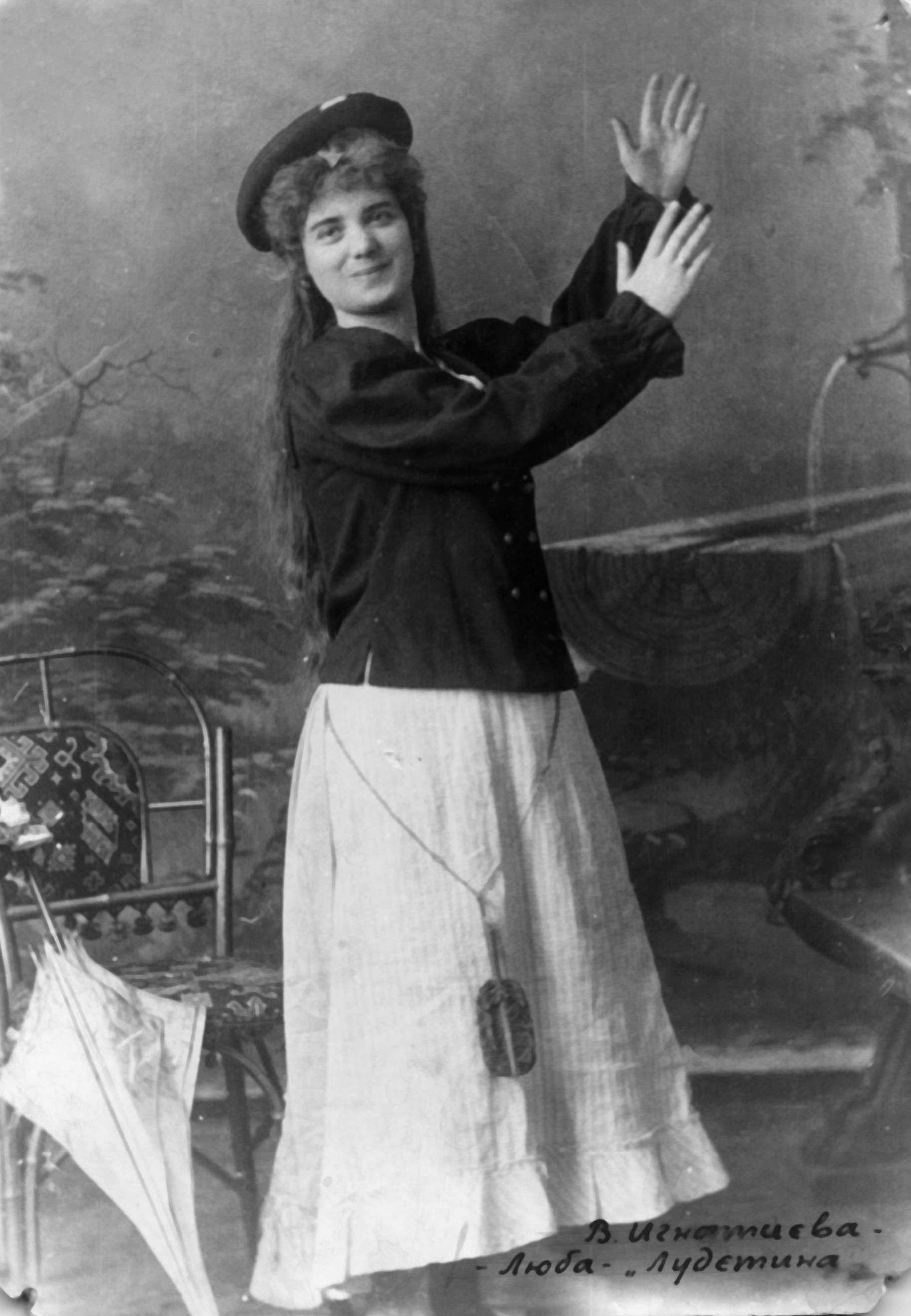 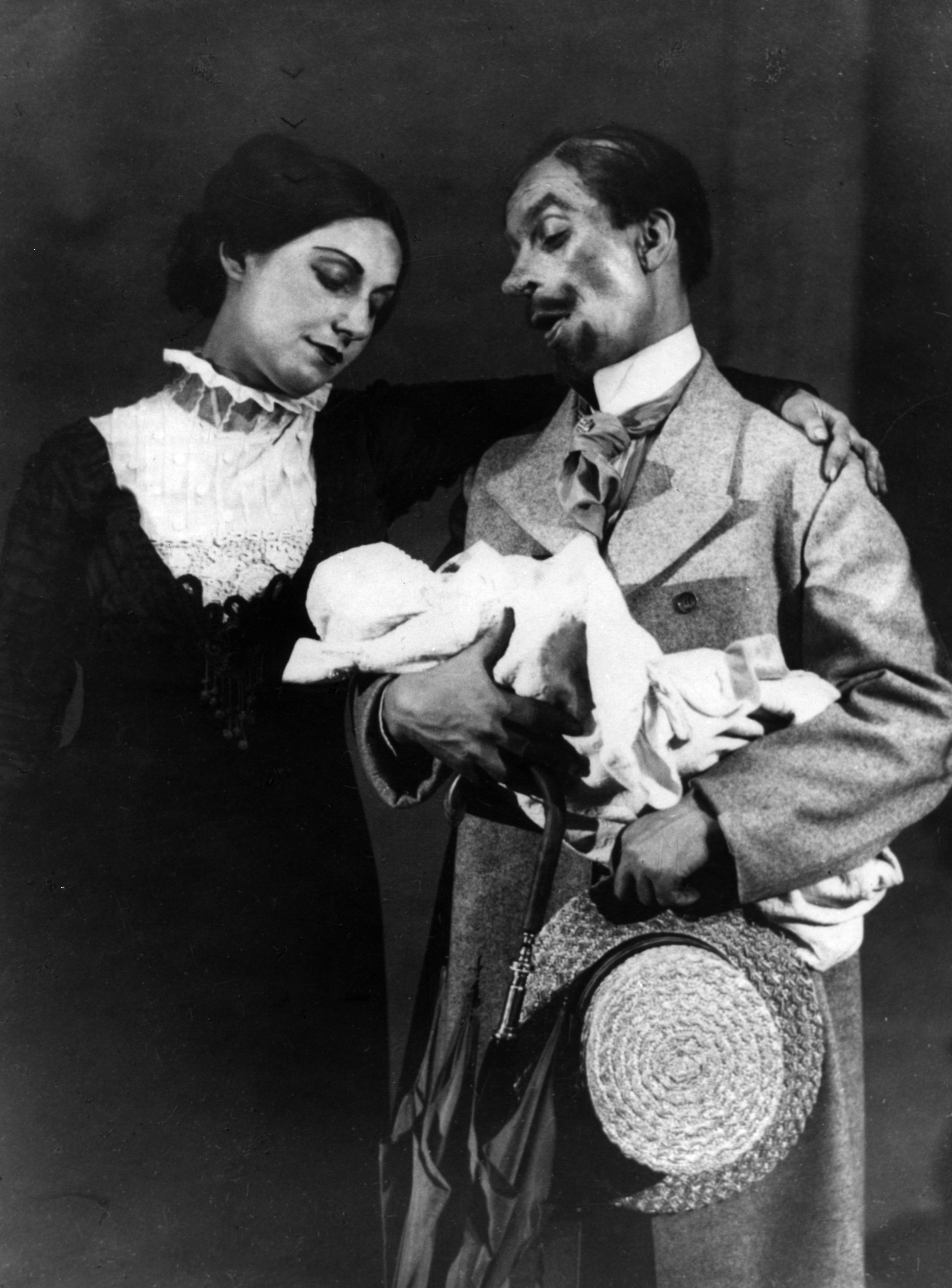 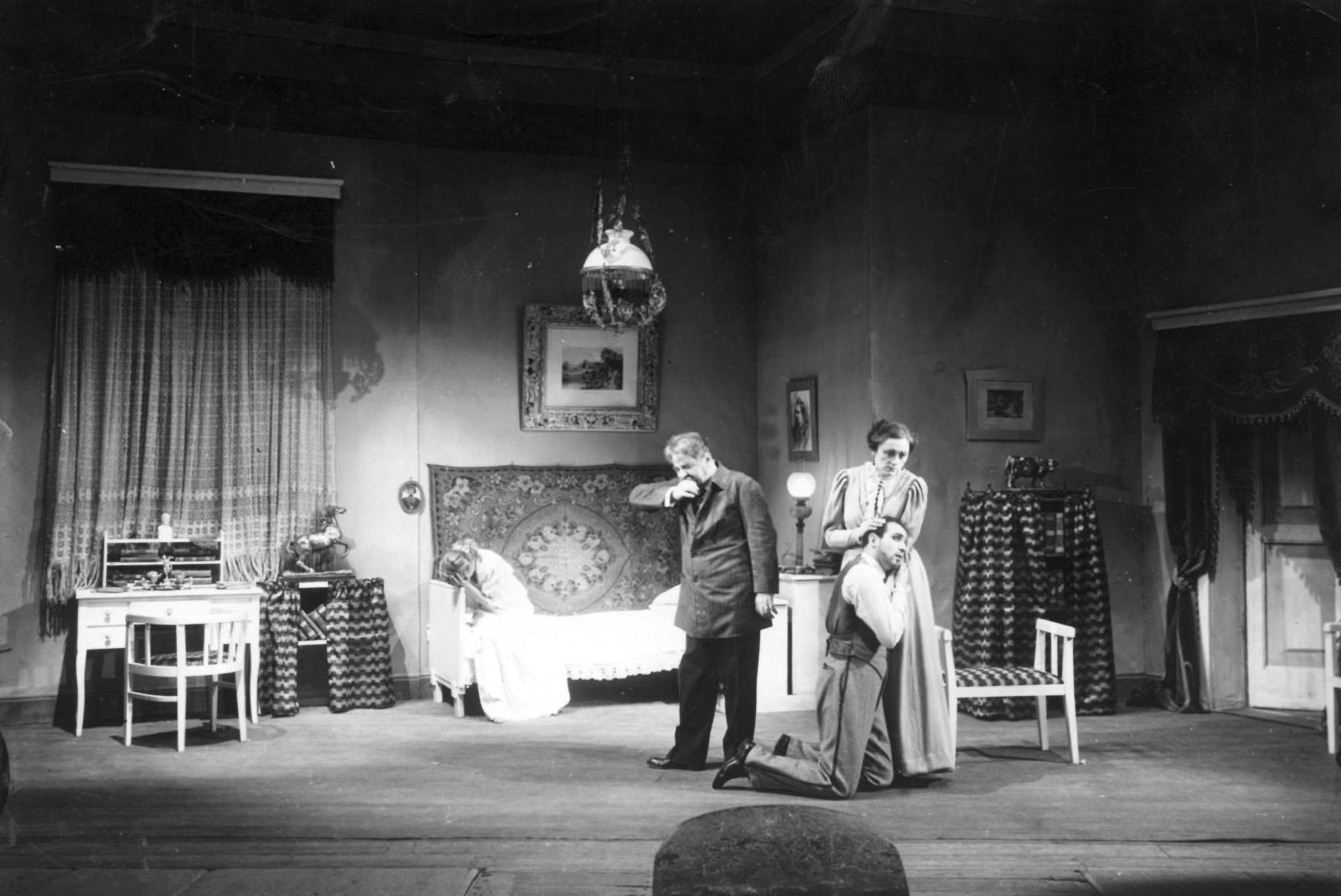 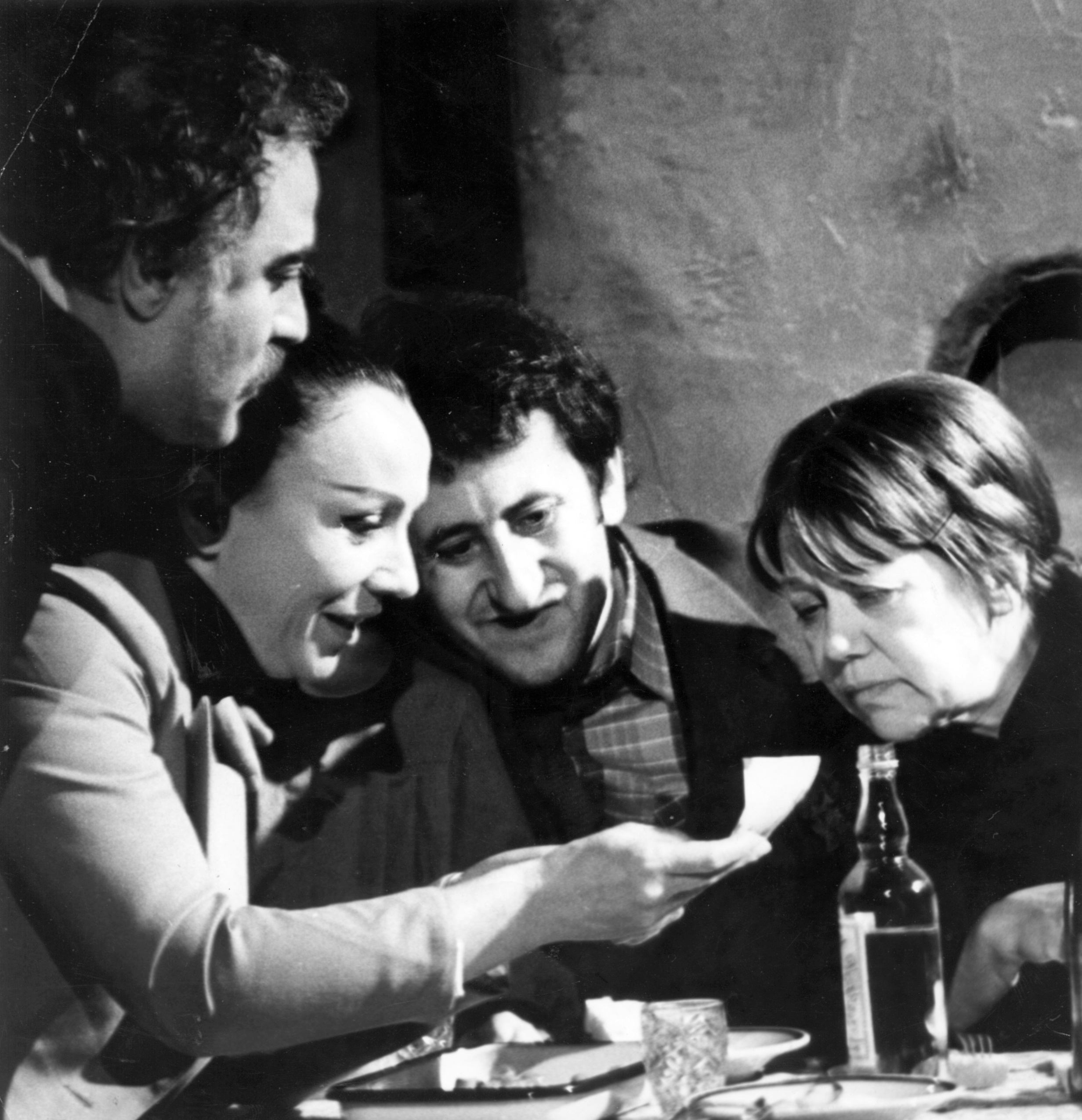 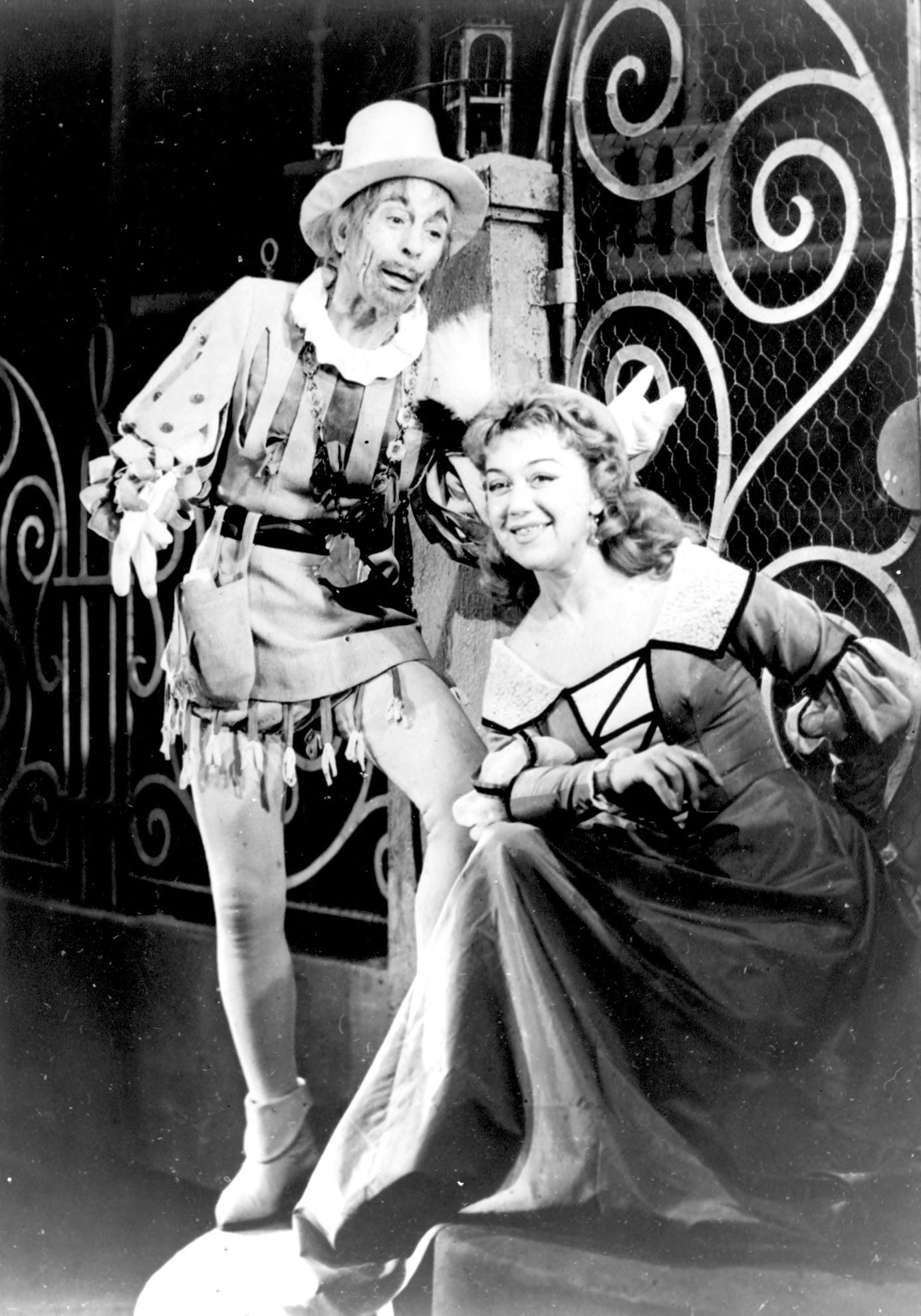 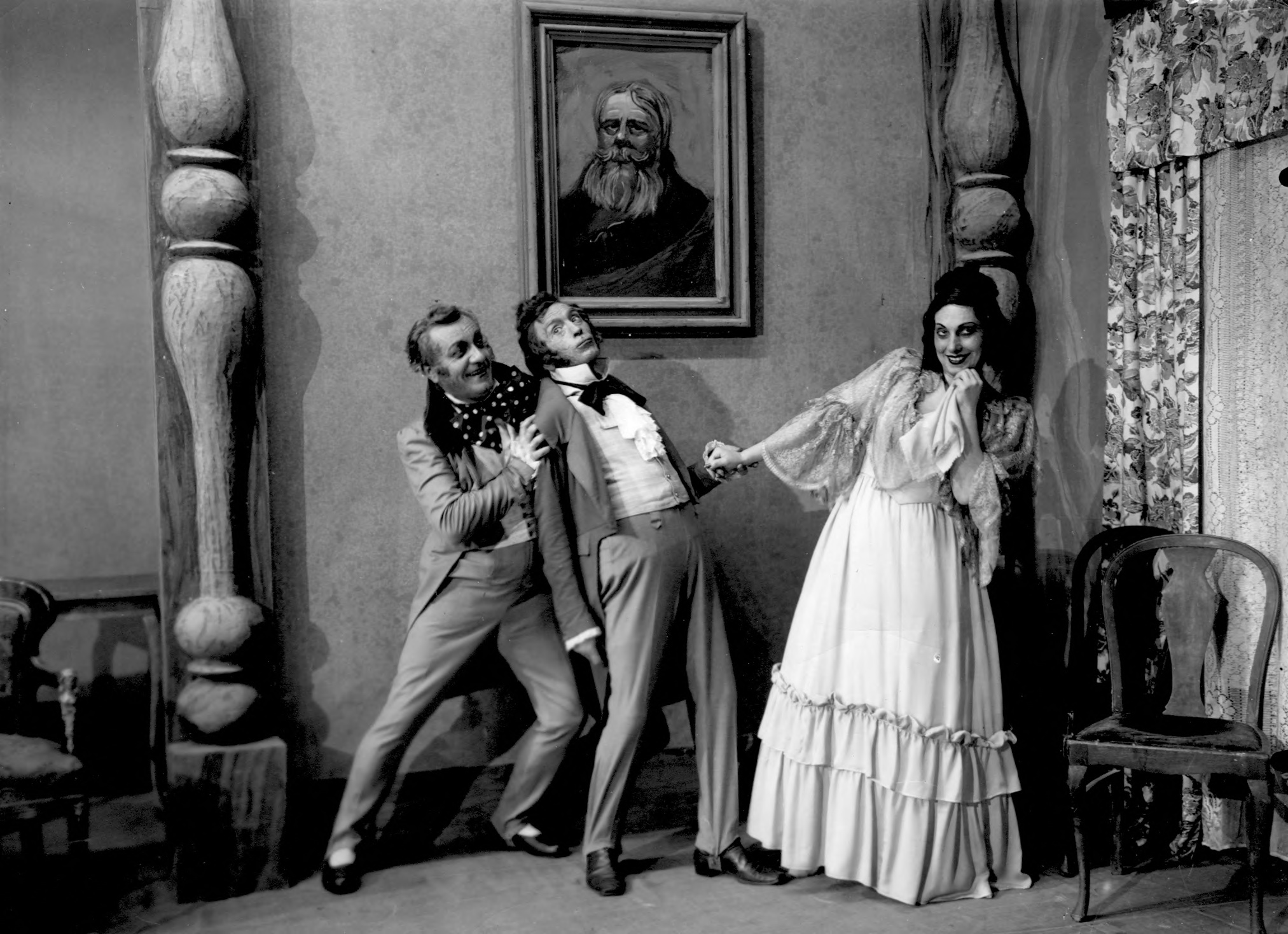 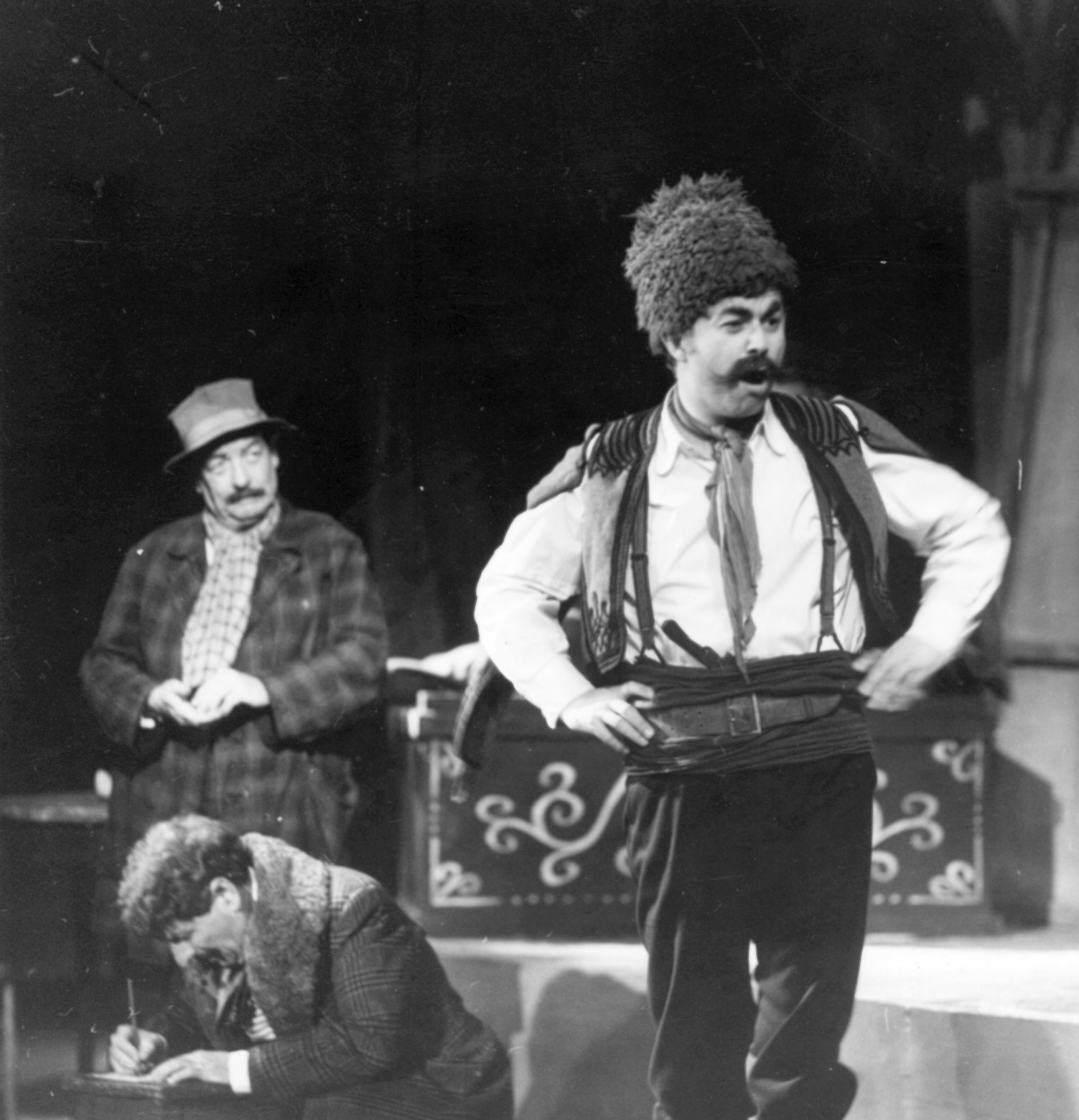 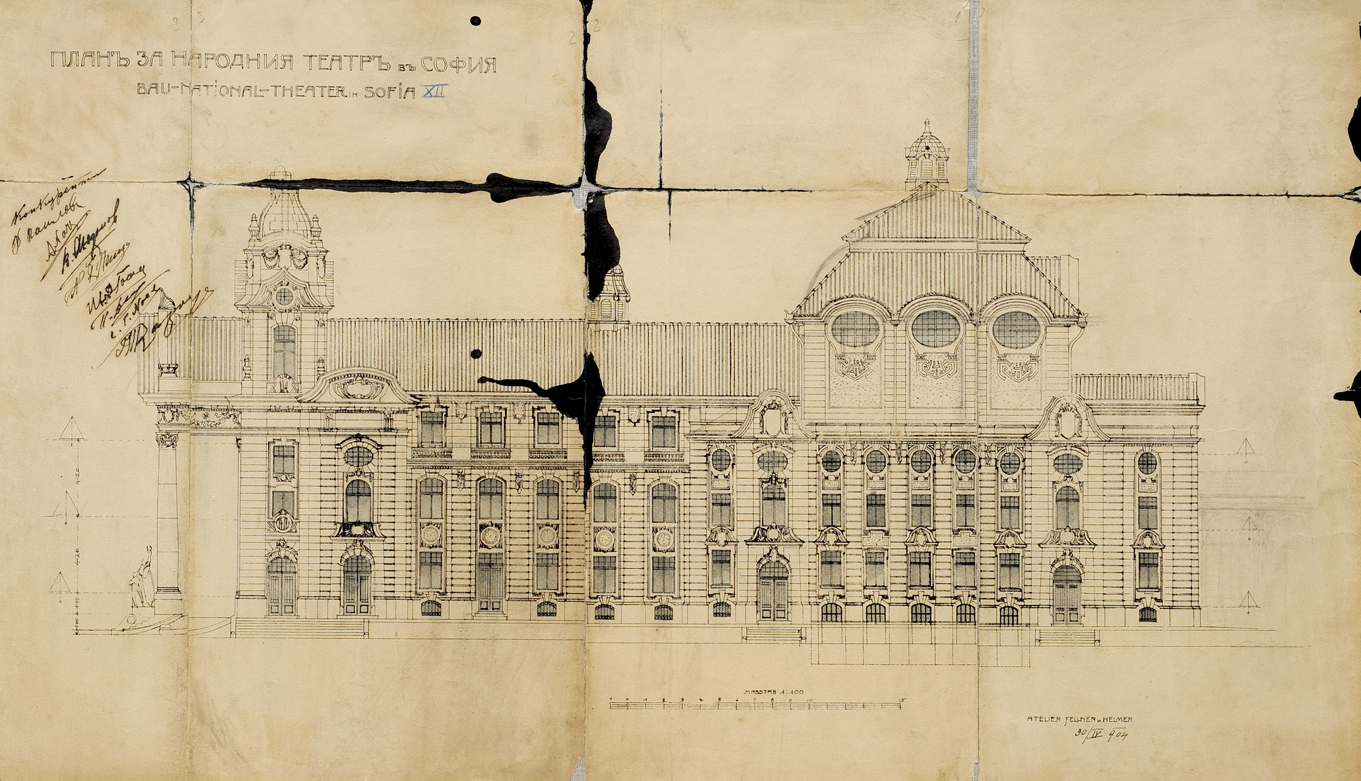 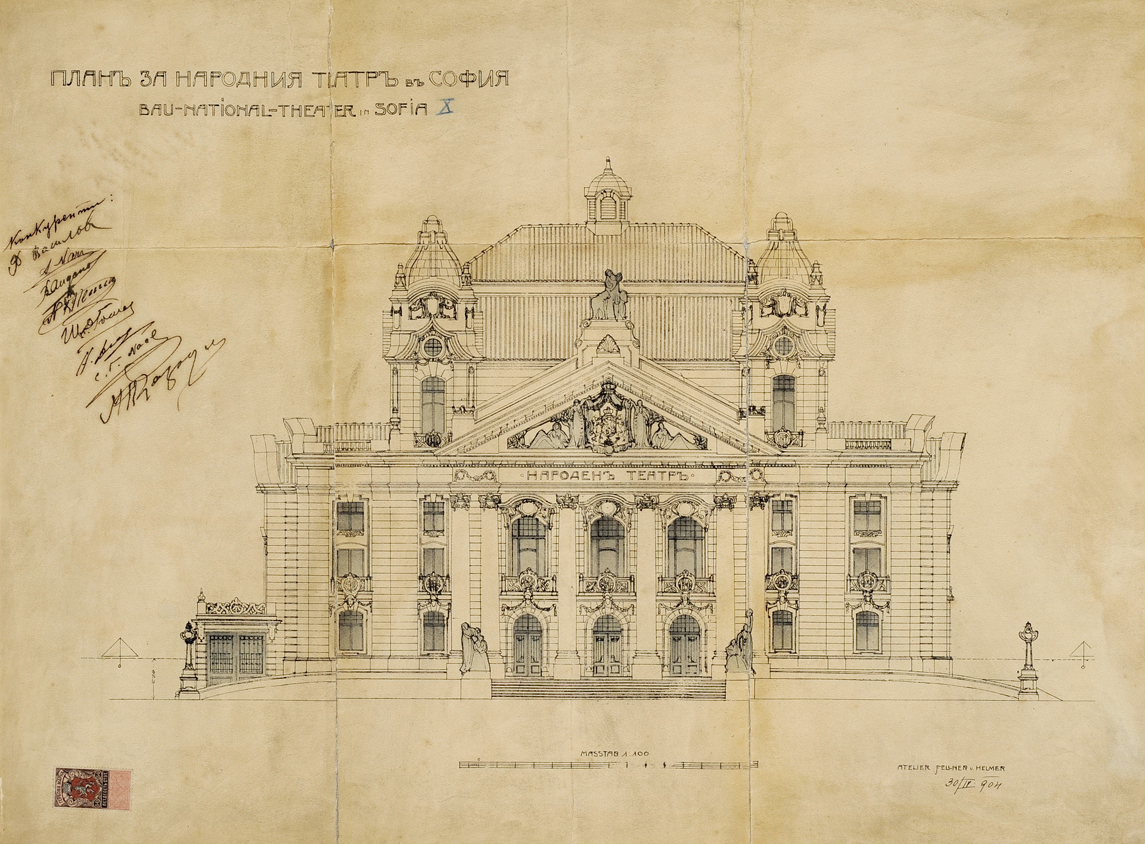 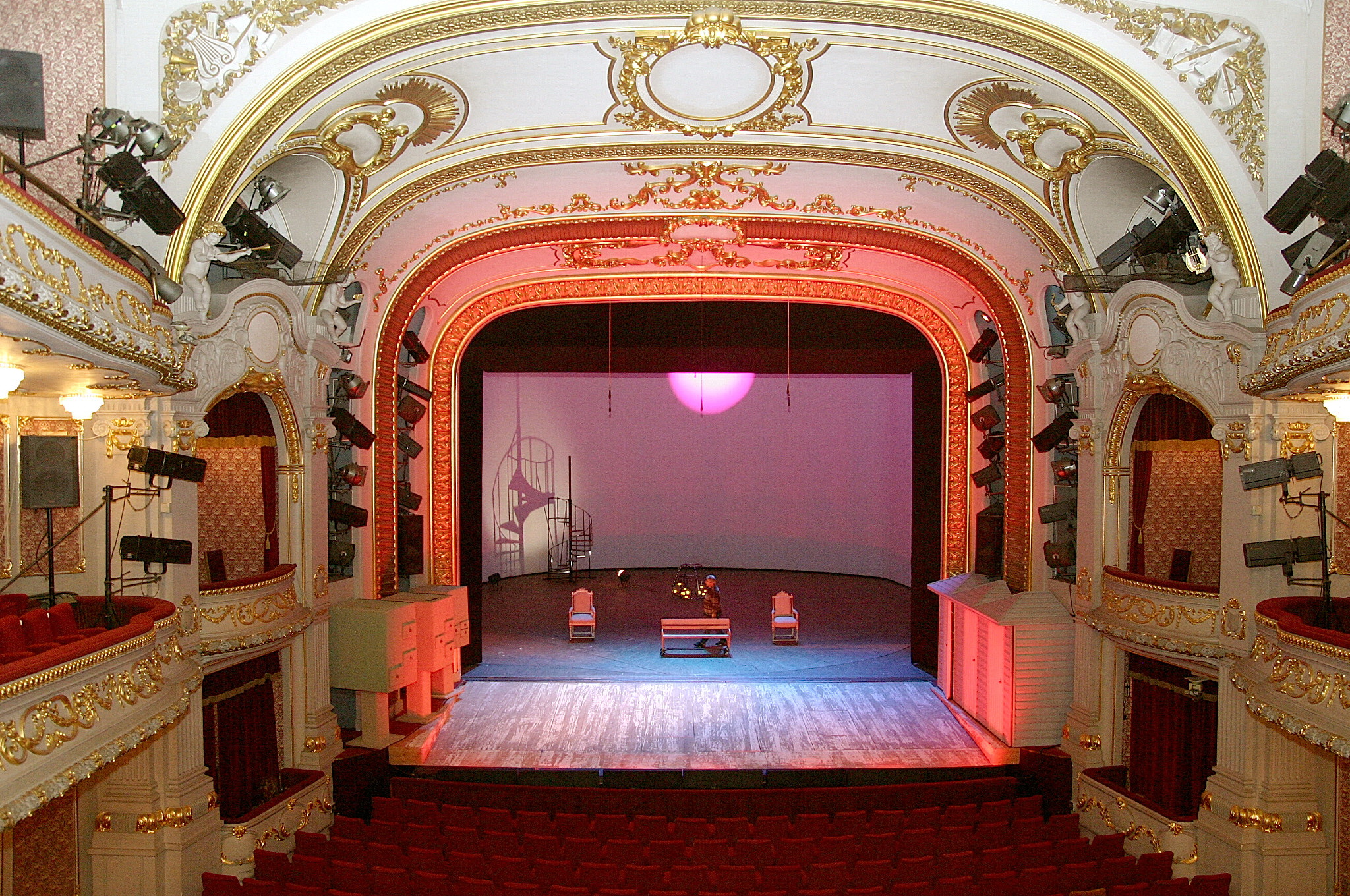 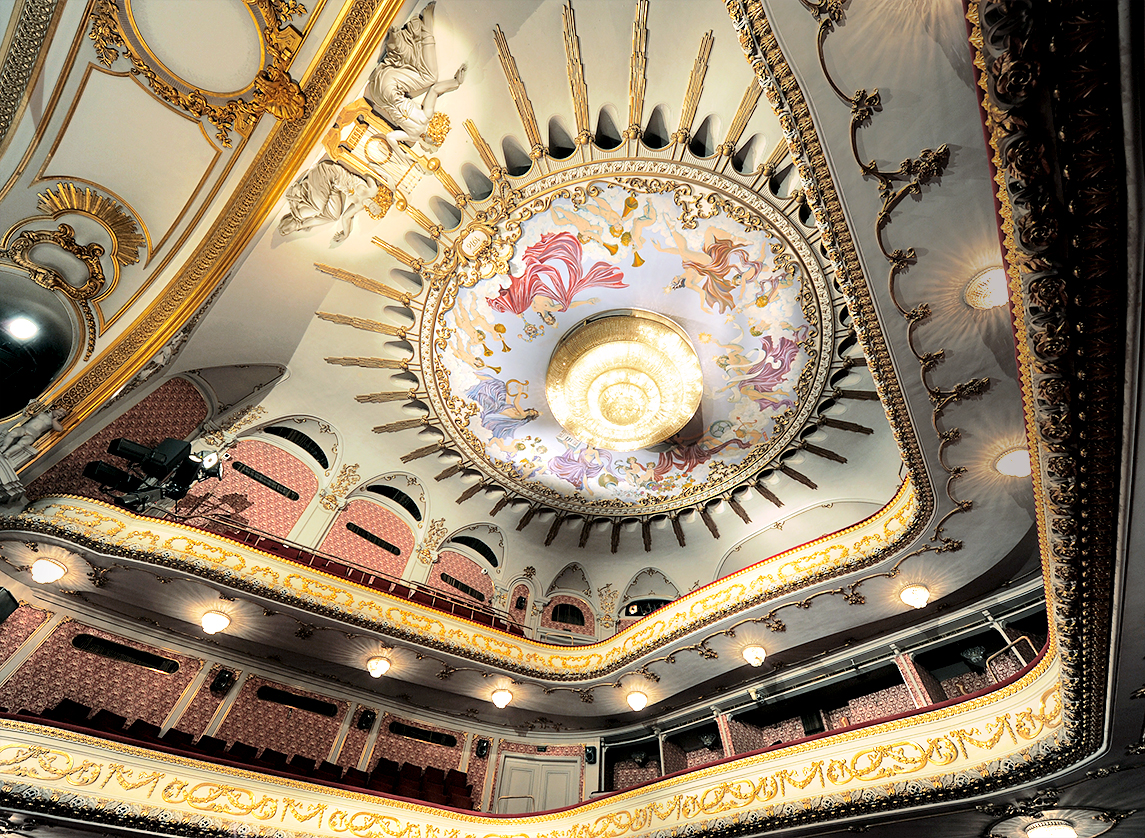 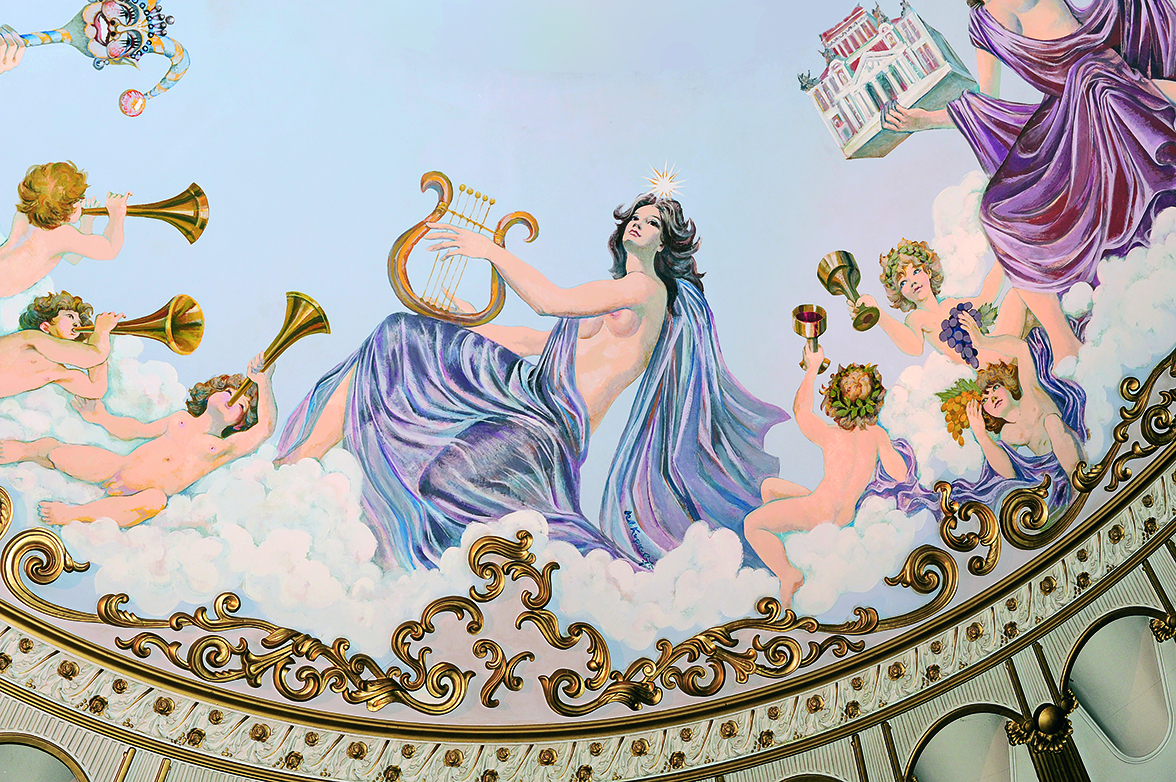